A headline emerged today on AOL that caught my eye: 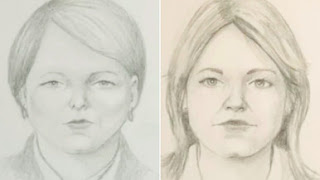 The drawings above are of the same woman done by the same artist in the same time-frame -- there's just one (crucial) difference.   - Story/Photo Credit: HuffingtonPost.com

Intrigued by the headline and photos, I opened the story and read on. What was found was refreshing. The article began by asking the question, "Do women see themselves less accurately than strangers do? A new Dove campaign says yes - - and offers proof, in the form of forensic sketches."

What is revealed is that Dove was working on a new ad campaign. They recruited seven diversely different women and asked them to describe themselves in neutral terms that relayed just the facts of how they look. (I had to laugh at this, wondering how on earth they thought they'd get factual answers when how we usually describe ourselves involve comments like ..."my eyes are small and too close together," "my nose is big and my lips are too thin," or "my face is lop-sided and my left eye droops.") Gil Zamora, a forensic artist who was FBI-trained, created sketches based on their descriptions. The same artist then created sketches of the women based on descriptions from total strangers who had earlier spent a bit of time with the women in a rigged meeting.

The series of sketches revealed harsh differences when displayed side by side. What was consistent in the findings were that the women themselves portrayed themselves in far less flattering ways, while the more objective strangers saw the women as far more beautiful. It would seem to prove that women do tend to be overly critical of themselves, and that is the premise of Dove's new campaign, whose tagline is: "You are more beautiful than you think," which I like.

Those who've had friends seeking cosmetic plastic surgery are sometimes surprised when the friend reveals that he/she wants a nose job, eyelid surgery, or perhaps a flatter stomach. Sometimes we cannot "see" what they find faulty or undesired in themselves, or don't think it's quite as bad as they're making it out to be. Other times, the desire to correct a feature or enhance one's body is more easily understood by friends and family. The ultimate answer usually is in what will make that person happy with themselves. But, there are extremes that plastic surgeons look for, such as Body Dysmorphic Disorder (BDD), where people suffer from severely inaccurate perceptions of their own body.

Perhaps this is one small step in helping women deal with their self-perception and debilitating issues that can arise such as shyness and low self-esteem, depression, anorexia, Body Dysmorphic Disorder (BDD) and other problems. Another helpful thing we can do for ourselves is to surround ourselves with people who see our true beauty and delight in the good this can do for us!


Take a close look at all of the sketches yourself and let me know what you think. Please comment below.

Andrea Algar is an author who writes on a topics that interest her. Over the last 30 years she has written articles on a variety of topics including psychology, health, dentisty, fashion and beauty, music, cosmetic surgery, antiques and restoration, as well as performance and classic cars. Prior to the Internet, she published a national subscription newsletter, edited two books, and produced works in photography and video. She currently contributes to several blogs on a regular basis.
Posted by Unknown

Envision a New You

Whether you are looking to enhance your looks with Breast, Chin, Cheek or Calf Implants, want help regaining a shape lost over the years and are considering Tummy Tuck, Liposuction, Thigh, Buttock or Arm Lift, or you want to reverse or slow the effects of aging with facial surgery, Dr. Young can help you achieve your goals.